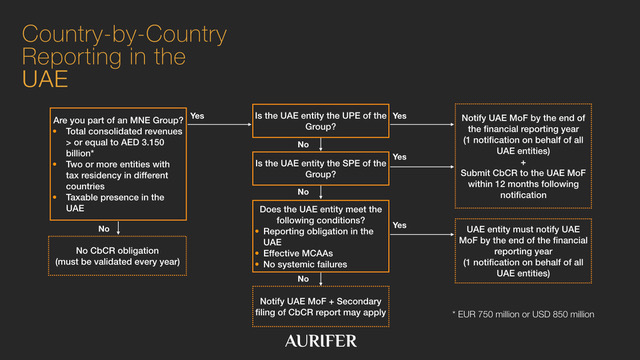 By way of a Cabinet Resolution, the UAE has introduced Country by Country reporting (“CbC reporting”). Almost simultaneously with the introduction of economic substance regulations, the UAE further implements international tax standards and joins around 80 other countries which have implemented the CbC reporting. The impact of this reporting on international corporations in the UAE cannot be understated.

In the Framework of the Base Erosion and Profit Shifting (“BEPS”) project of the OECD and the G20, countries agreed, amongst others, to implement BEPS action 13 in order to tackle the shortcomings of the international tax system.

This action prescribes that countries implement legislation requiring multinational enterprises (MNEs) to report annually and for each tax jurisdiction in which they do business certain relevant tax related information and exchange this information with other countries.

The UAE’s legislation very much mirrors the standards imposed by the OECD which have been adopted in countries which have already implemented CbC reporting. It is applicable to groups which have subsidiaries in at least two tax jurisdictions. The threshold for the consolidated revenues is AED 3.15 billion.

The Federal Tax Authority is not involved in the process, even though according to its Establishment Law it is also competent.

Information to be shared by 31 December 2019

The CbC report needs to include the amount of revenues, profits (losses) before income tax, income tax paid, income tax payable, declared capital, accrued profits, number of employees, and non-cash or cash-equivalent assets for each country. In absence of any UAE Generally Accepted Accounting Principles, it will be interesting to see what accounting methods will be used to share the information.

In addition to the above information, the tax residency of the subsidiaries needs to be disclosed, the nature of its activity or main business activities.

The notification needs to be done by the end of this year and the CbC report by the end of 2020 for companies with a financial year matching Gregorian calendar years. The portal can be found here: https://www.mof.gov.ae/en/StrategicPartnerships/Pages/Country-by-Country-Reporting.aspx.

In KSA, the CbCR notification is made along with the corporate income tax or zakat declaration (within 120 days following the financial year end). In case of the CbCR filing, similar principles apply where the report must be submitted within 12 months following the end of the reporting year of the MNE group. Recently, the General Authority of Zakat and Tax of KSA has made the portal available to submit such reports: https://gazt.gov.sa/en/eServices/Pages/eServices_082.aspx.

In Qatar however, since the CbCR portal is not in place yet, only Qatari resident Ultimate Parent Entities of the MNE Group who fall within the scope of the CbCR regulations are required to submit a notification for the financial year started 1 January 2018 and also another notification with respect to financial year starting on 1 January 2019 maximum by 31 December 2019.

The notification for two consecutive years will have to be done manually in paper form, until the online platform is set up. The notification has to be submitted to the Department of Tax Treaties and International Cooperation of the General Tax Authority of Qatar or the tax department of the Qatar Financial Center, whichever is applicable.

Sharing of the information

If businesses fail to file to comply with their obligations under the CbC reporting, they run a penalty exposure of up to AED 2,250,000.

The UAE is the third GCC country to implement CbCr reporting after Qatar and KSA had done so previously. The context of the UAE is slightly different, given the current absence of Federal Corporate Income Tax. Both Qatar and KSA have a form of corporate income tax.

How useful the CbC reporting is for MoF currently in absence of any Federal Corporate Tax remains to be seen. However, the introduction of the reporting will allow the UAE to be removed from domestic, European and other blacklists.

The Federal Tax Authority may be interested in the file for VAT purposes and ask tax payers to reconcile the amounts in the CbC report, as it can do today already with audited financial statements.

The importance of the introduction of CbC reporting cannot be understated. The UAE’s important neighbour, Saudi Arabia, will be very keen to examine the information in the CbC reports filed by UAE companies to verify whether it is receiving the right end of the tax portion.